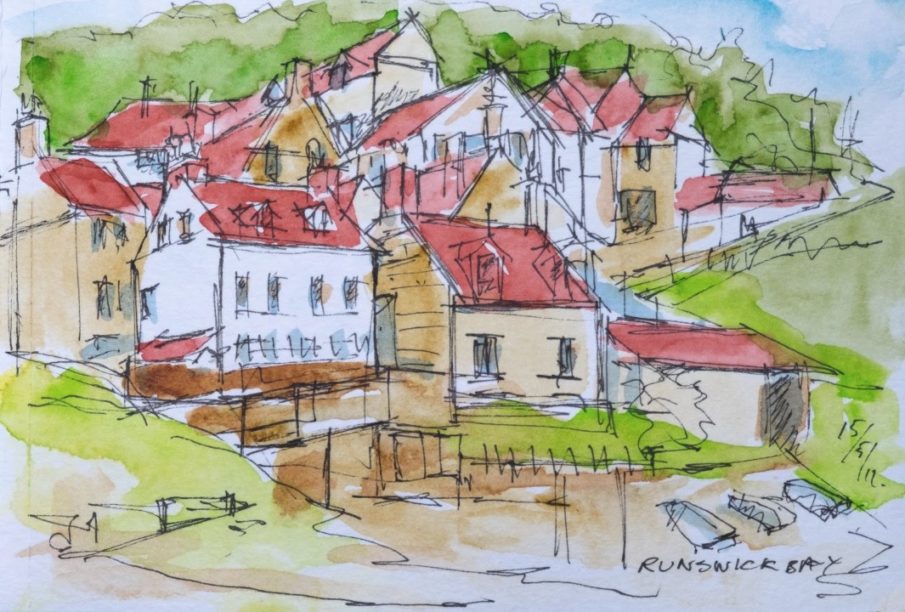 I hike on down the coast, cross the sands, pass Hob Holes, clamber up a ravine and see a different side of Whitby.

I get an early start and take the steep path down into Staithes, which is mostly still asleep, to find the narrow cobbled street leading up the hill again on the route to Whitby. The path climbs above Brackenberry Wyke heading towards Port Mulgrave and later I look up the meaning of ‘Wyke’ which, in this context, is a Norse word for ‘a place below the cliffs where a boat may be landed’. All along this coastline, names derived from Norse merge with names from more recent industrial activity to create an echo of its rich history which has now largely given way to walks and nature reserves.

At Port Mulgrave the path diverts inland before rejoining the cliff-edge. Port Mulgrave had a quay reached through tunnels where a railway carried ore from a mine to be shipped to the steel furnaces of Jarrow. The line was extended later and for some of today I walk along the track-bed of the Whitby, Redcar and Middlesbrough Union Railway, except when the path goes up and over a high cliff instead of through the old tunnels bored under it.

Far below the cliff-edges are spoil heaps with remnants of brick and steel mine structures worn smooth by the elements, now home to seabirds and seals. Hard lives were lived all along here.

I arrive at Runswick Bay: red-roofed houses apparently tumbling higgledy-piggledy down the cliff onto the sands. There is a café for a welcome cappuccino, missing from my cold-bag breakfast this morning. I get chatting to a group of hikers: men from Essex from their accents. My guess is correct: Basildon, not that far from where I grew up. But blimey, they don’t ‘arf talk!

I sit to sketch the little hamlet before heading off again. The Cleveland Way crosses the beach here, except at high tide when you just have to wait, but it’s way out this morning. There is light drizzle in the air as I pass under the Hob Holes and find this later:

“If your child was suffering from ‘t’Kink Cough’ (Whooping Cough) your only hope of a cure is to carry them along the beach, lay them down within the Hob’s Hole… and build a fire of driftwood and seaweed collected from the beach. Once the fire is going, carry your child round and round the fire (clockwise, of course), chanting ‘Hob Hole Hob, Hob Hole Hob, Me bairn’s getten y’Kink Cough, Tak it off! Tak it off!’ ” (Visit Whitby website)

After nearly a kilometre along the beach, the path heads towards a steep, slippery gully with a stream running down it. I can hardly believe it but there are the waymarks so I clamber up, splashing through the water, thankful for my waterproof boots.

Up, down and along more cliffs and then a kink in the path over an estuary at the little hamlet of Sandsend before a long, straight, gently rising trek along pavements on the main road into Whitby with breakwaters, beaches and beach-cafés on the way. Then off down and around a golf course, through a cutting in the dunes and into Whitby’s West Cliff area with its grand hotels and Victorian shelters: the posh end of Whitby.

I mooch around for a while in the old town and find ‘Monks Haven’: a little tea room where I will return several times this week. Then a bus back to Staithes. Little more than half an hour later I am back in the Crow’s Nest getting ready for another evening in the Cod & Lobster. 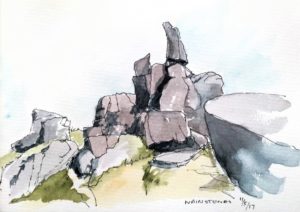 Best of the year – 1. North Yorkshire 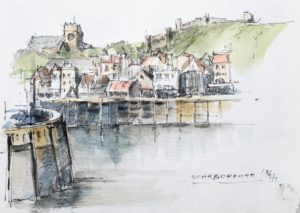 Scarborough and over the Irish Sea 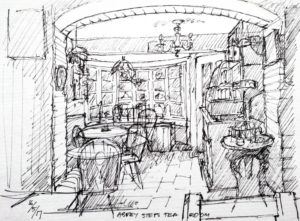 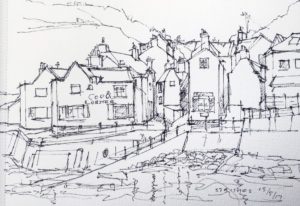