My Gear on the Dingle Way 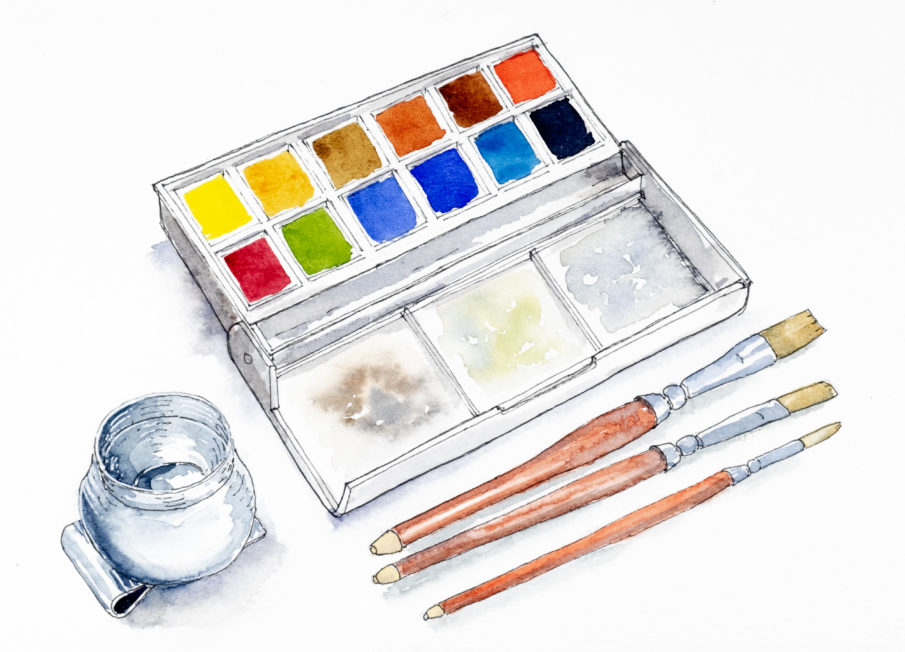 I haven’t written about hiking gear before – not everyone’s cup of tea perhaps!  If you are more interested in how I do my sketches, skip to the end.

Before starting the Dingle Way I had been having problems with a nasty rash on my legs after hiking, especially in hot weather. My GP wasn’t sure what it was but after some research I decided it might be ‘Exercise Induced Vasculitis’1 which is often misdiagnosed and poorly understood except that it tends to afflict the over 50’s (and I am well over that). I didn’t seem to get the rash around the elastic tops of my socks so guessed that compression socks could help. I wore Hilly Pulse calf compression sleeves on this hike and didn’t get a rash at all! They were also very comfortable so I will use them again. I didn’t want to wear trousers over them so I made some capri shorts by altering a pair of Craghopper Nosilife Pro trousers. That combination is possibly my perfect leg-wear now and I found that the Hillys shed water very effectively so I only needed my Gortex overtrousers in the really heavy rain.

I took Trekmates Glenmore ankle gaiters. They sealed the top of my boots from mud, sand and water. There was a lot of mud, sand and water, so they paid their way several times over! My Rab ‘Spark’ jacket was perhaps too light for the heavy rain I walked through and it did fail under my pack shoulder and waist straps, but with a light fleece underneath, not much dampness penetrated right through to my skin.

I switched from my usual Bridgedale socks with Coolmax liners to Smartwool socks and liners. The merino wool worked really well: cooler, more comfortable and much less smelly than the Bridgedales.  I didn’t get any blisters, the ‘2Toms SportShield‘2 I use really helps to prevent them.

Keeping cool with a warm heart

I took three baselayer tops. A Rab Interval tee which is very light and a Paramo Cambia zip-neck which has more warmth. They both dry in a couple of hours so can be washed overnight. Paired with a lightweight Regatta fleece, and a Buff neckwarmer they cover most September conditions and kept me cool on warmer days and warm in cooler ones. I also had a merino wool long-sleeve tee in case the weather turned colder, but never used it. I had a change of light clothing so I didn’t have to sit in smelly hiking gear in a pub in the evenings.

My Osprey Kestrel 38 backpack is now a firm friend since I first wore it on the Kerry Way, although I did get some sore spots on my hips before I perfected the strap adjustment. The waterproof cover worked well even in the wind, but it did tend to direct rainwater down between my back and the pack if incorrectly adjusted. Everything inside the pack was in dry-bags which I also find useful for organising everything. I usually carry around 9—10 kilos (20—22 lbs) at the start of each day, perhaps more if I have taken more food and water, ending with around 7—8 (15.5—18 lbs) when the food and water is gone. The extra bits and pieces for photography and sketching I carry in my waist bag and hip pockets add to that total but I have never actually weighed a completely full bag.

To save some weight, I collect and filter water when a good source is available. I use a Sawyer Mini filter but have replaced the collection bag/bladder with an Evernew 2 litre bag that is much easier to fill and use. I didn’t need to use the filter much on the Dingle Way because there were usually cafés and pubs along the route for refreshments, but drinking cold, clear water filtered from a mountain stream is a real pleasure.

I missed my Meindl Bhutan boots. I left it too late to get their worn soles renewed, new Bhutans were out of stock, so I had to replace them with Meindl Kansas boots which are a lighter version made on the same last. They don’t have the continuous rubber rand of the Bhutans and so are less supportive, but they did keep my feet dry through some foul weather. I take a pair of lightweight Crocs for after-hike use.

The biggest failure was my Lowe Alpine Fjell waist pack in which I carry my sketchbook and Sony RX100 M4 camera. I had made a dry-bag for the sketchbook but stupidly, I had my camera in a neoprene case. The waist pack let in a lot of water and the neoprene absorbed it so the camera suffered. It recovered most of its functions once dry but the viewfinder is dead, and that was one of the main reasons for choosing it. I really don’t understand how a waist pack for hiking can be made without waterproof material or a rain cover and it’s strange that Sony can make my Xperia phone water-sealed but not my camera. I should have known that the Fjell would leak, I had exactly the same problem with a similar but smaller bag.

I don’t take paper maps on waymarked trails but rely on OS maps on the Viewranger app. Some may frown at that but on a well marked route I think it is safe enough and it hasn’t failed me yet.

Last but not least, my Leki walking poles. They kept me upright all the way and I wouldn’t hike without them. When not needed (on roads for example) the Osprey ‘Stow on the go’ pole holder works brilliantly, although because my poles fold so small, they have to be stowed full-length.

My current sketchbook is a Seawhite A6 Watercolour Sketchbook which is just brilliant and slightly larger than the AMI ‘Aquarelbook’ I have used previously. I have adapted a Cotman watercolour box by removing the pans and refilling them from tubes.  I have also removed one edge of the lid so a small water pot can be clipped to it, but I didn’t take the pot with me this time. I mainly use Schmincke Horadam watercolour paints now, after changing from Winsor & Newton3 (the colours in italics are those I use most).

I took 2 Pentel ‘Aquash’ water brushes (not shown) and three Dalon brushes of different sizes (D88 Long-flat 3/8 and 1/4 inch, D 77 round No 4). I have cut down the shafts of the Dalons to make them easier to pack in the brush-roll I have sewn from waterproof material. I use 0.1 Staedtler Pigment Liners to draw with, they are waterproof so I can paint over them. On this hike, I didn’t take the Lamy fountain pen I also use because it is difficult to carry the waterproof Noodlers Bulletproof Ink I like to fill it with. Perhaps the most useful, if mundane item in my set is a small piece of cotton cloth which can be used to clean brushes and palette, mop spills and sponge off highlights. It now has a many layered history of colours on it!

To get the sketches into digital form for this blog when hiking, I photograph them with my Sony camera, often on a window-ledge in a B&B, transfer the files to my Xperia Z5 Compact phone with the Sony ‘Play Memories’ app and then edit them on the phone using ‘Snapseed’. I type on the phone too, with a stylus. I need to get something with a larger screen soon to make all that a little easier! On this hike, I got into the routine of doing some writing after dinner; going to bed by around 9; sleeping soundly with my body-clock waking me about 7—8 hours later; writing up yesterday’s route and finishing sketches, all before breakfast. 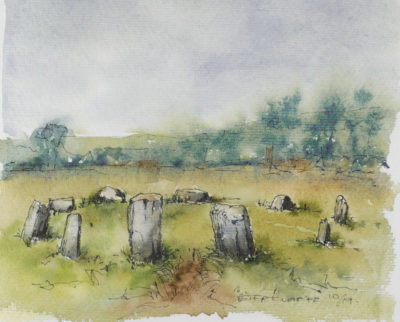 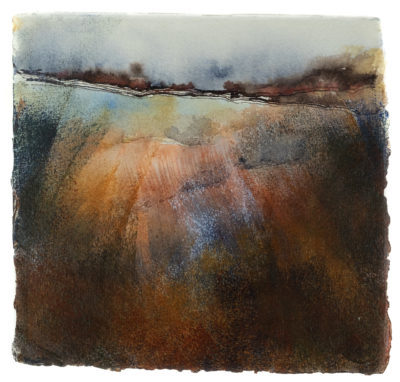 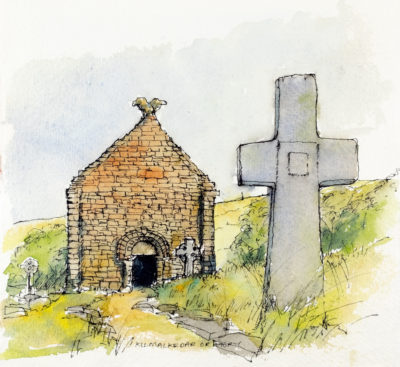 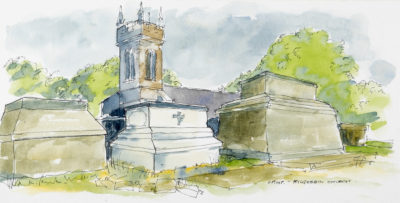