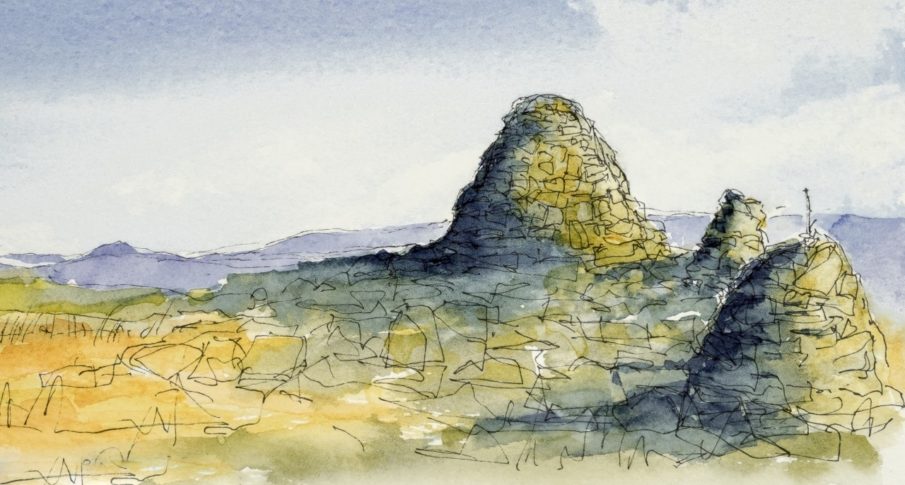 The first cold snap of the year sprinkles snow on the higher ground of the Beara across Bantry Bay and brings blue skies regularly crossed by dark clouds,  blustery showers and rainbows. Mount Corrin is an ever-present feature across Dunmanus Bay from where I live with its prominent conical cairn often in view. Although on the Mizen peninsula, Corrin is part of a long loop walk that links with the Sheep’s Head Way, starting and ending in Durrus at the head of the bay. I noticed a new stile on the route some time ago and want to explore where it leads to, so I park near the crest of the ‘Mines Road’ that snakes up from the shore of Dunmanus Bay heading towards Ballydehob and start walking back down the hill towards the coast.

I take the short, signposted detour to Dunbeacon Stone Circle which lies in a field beneath a low ridge. It’s good to have easy access to this important site but, in my opinion, it is a shame that the heavy fencing around the circle is so intrusive. The fence has isolated the monument from the landscape and obscured its significance; it feels sadly orphaned and despoiled. 1

Back on the road and another short detour to the Coolcoulaghta stone row, now missing one of its original stones.

Across the new stile and up a narrow track beside a gushing waterfall and stream, then over fields and along a tree-arched boreen overflowing with ankle-deep mud with no chance of dry footing. In an open field a solitary hawthorn tree and a few stones mark a cilleen. On the horizon Hungry Hill looms cold and grey, wearing a cap of snow.

Out onto small roads and a climb up to the pass where I turn off the road onto the path towards Corrin. It’s wet and muddy and a cold wind gets up. I skip around the deeper mud and the deceptive green patches of sphagnum moss that often hide deep holes, as I climb beside the fence following the ridgeline.

The climb becomes steeper as I approach the cairn. Behind me, a dark curtain of cloud provides a backdrop for a rainbow.

The conical cairn has smaller satellite cairns, probably built stone, by stone placed by visitors over the years and, just before it, a stone row seems to point down the Mizen to Knockaphuca (Cnoc an Phúca ”Hill of the Pooka or sprite’). A dark squally shower approaches and hits just as I reach the cairn. I shelter in the lea of the mound of rough stones to eat oat biscuits and drink hot ginger tea from my flask as the wind whistles past. Before me Roaringwater Bay reflects bright sunshine and the twin buckyball radar domes on Mount Gabriel reflect the bright light.

The shower passes and I begin the steep descent. It’s slippery and I take my time, half expecting my footholds to slip away on each step down. Then onto the low ridge that descends more gently to my starting point and the short journey home to a warm fire.

This is a loop walk over small roads, boreens, fields and rough ground. The ascent up to the cairn on Mount Corrin is relatively strenuous and the descent is quite steep. Ground conditions can be very wet and boggy. Except for a short road section, the route is waymarked as part of the longer Sheep’s Head Way ‘Mount Corrin Loop’ , even though Mount Corrin is actually on the Mizen peninsula.

Full Mount Corrin Loop on Living the Sheep’s Head Way website (At the time of writing, the route description misses a change in the route at the bottom of the ‘Mines Road’) 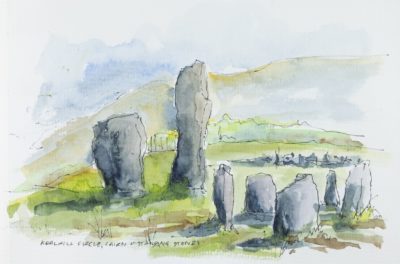 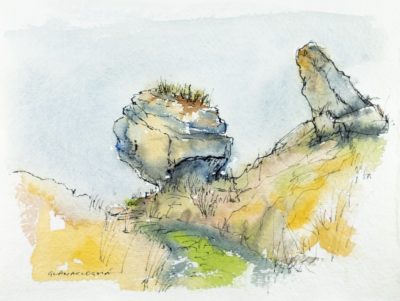 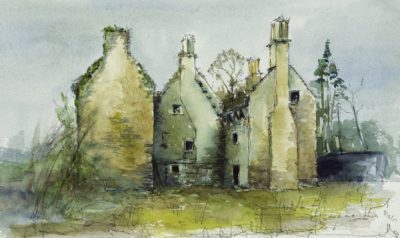 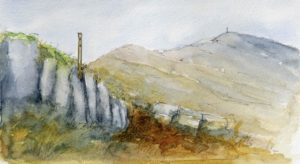