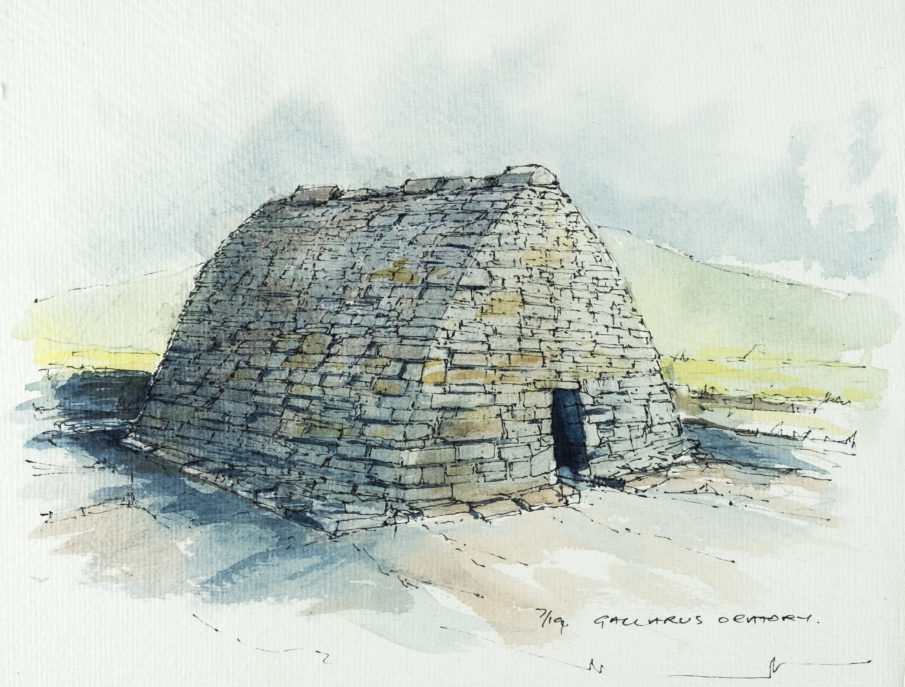 This post is a little different from usual. I rewrote my original version about a day hike I did last May, for a week-long travel writing workshop on Whiddy Island given by author Adam Weymouth as part of the West Cork Literary Festival in July 2019. The preparatory exercise had to include a journey and a meal.

Adam has recently published ‘Kings of the Yukon‘ which tells of his canoe journey down the great river, tracing the lives of the king salmon and the effects of their decline on the people whose culture and traditions rely on it.

A week before the workshop I went to a week long Irish language course in Ballyferriter near Mount Brandon and read this piece at the closing seisiún (music and story session) there.

Lughnasa, the celebration of the new harvest. Fionn MacCumhaill, the fair haired warrior, sets out from what is now Ventry to battle Lugh in the guise of Crom Dubh – the dark crooked one. Crooked because he carries the first sheaf of grain on his back out of the darkness of the earth on Ireland’s second highest mountain1. St Brendan later gives his own name to the mountain before setting off on his epic voyage in a leather and wattle naomhóig to discover paradise.

I am walking Cosán na Naomh (The Saint’s Way), a pilgrim route following Fionn and the Saint through Corca Dhuibhne (Dingle Peninsular) from Ventry to Mount Brandon. The route traces a line over layers of history embedded in placenames and the landscape itself. Lughnasa mountain pilgrimages survive: the popular climb up Croagh Patrick and Mount Brandon are made on ‘Domhnach Crom Dubh’ (Crom Dubh Sunday) at the end of July.

On a soft Irish morning in May, a couple of kilometers west of Ventry, I squeeze my backpack through the narrow doorway of Páidí Ó Sé’s grocery for lunch supplies. As I pay for the only packet of cheese in the tiny shop I ask the elderly woman behind the counter about the weather;

“I don’t know – it was fine last week” she shrugs.

A lane between the church, the pub and a statue of football hero Páidí Ó Sé himself leads me through soft dunes onto the vast sweep of Cuan Fionntrá (White Strand Bay). The tide is low, the firm sand glistens. Rivulets run down towards the sea, branching into delicate fern-like deltas by the tide-line. Brightness spreading from the horizon slices the blue-grey of the sea from the grey-blue of the sky. This is the first hike I have done in several months and although I am nursing a sore knee, the whole beach is mine and it’s good to be out.

I make a quick stop in Ventry for a second breakfast. It’s the Gaeltacht; conversation in the Post Office is in Irish and all the place names along this route are too. I am discovered with my cuppa tae by Herself and two friends and we go up the gently rising road to Cill an gColmán (Kilcolman), an early ecclesiastical enclosure in a sloping field wet with dew. On a large boulder are two inscribed crosses and, in weathered Ogham, ‘Colman the Pilgrim’.

Leaving my companions I head off down the road just missing a herd of steaming horses led from the hill by a farmer in a Jeep. Rounding a bend, Rahinnane tower house stands inside an older ring fort, one of its four walls blown away and gaping.

The open road climbs, then narrows, the hedgerows enclose the view and through a farmyard full of penned cattle I enter the quietness of a stony boreen hugging the contours of Leataoibh Beag and Leataoibh Mór (‘Little Hillside’ and ‘Big Hillside’). I follow the worn path framed by high walls and fuchsia hedges thick with wild flowers and imagine the echoes of pilgrim footsteps. I am happy out, moving through the landscape but connected to it, alert for the next footfall, my breaths and the tip-tap of my poles marking time. Boreens like this are pathways embedded in the ancient language of the landscape; are there ghosts here?

The peaceful boreen is cut suddenly by a busy road. I cross and step back into the silence of the past. A wicket gate into a wet field of sheep and buttercups brings me to Teampall na Cluanach. By a ruined oratory, the inward curve of its walls cut low but still holding a darkness, two cross slabs stand looking across to Ard na Caithne (Height of the Stawberry Tree) sweeping down to Smerwick Harbour. Yellow Flags cluster round, bright against the low stone grave markers of a cilleen – old souls in bloom.

The path loses its sense of direction to skirt around modern field boundaries and then, over a ladder stile, brings me to Gallarus Oratory.

Séipéilín Ghallarais is intact: corbelled stone curving to a ridge like the keel of St Brendan’s naomhóig. Ghallarais: “Shelter for foreigners”; yesterday’s pilgrims — today’s tourists. The site has been manicured by the OPW but the oratory retains its cold presence within; Seamus Heaney describes it perfectly:

“A core of old dark walled up with stone”

Today the dark is being drained by selfie-takers so I don’t linger.

By midday I have covered nearly 15 kilometres. I’m hungry and need a rest. I pass Cathair Deargáin, a cashel encircling the hollow stumps of beehive huts and then the fallen walls of Fothrach an tSainsiléara (The Chancellors’s House) to find a place to eat at Cill Maolchéadair (Kilmalkedar). Except for the crows in an oak tree, it’s blissfully peaceful as I sit in the sun by a weathered tomb to eat my Ventry bread and Páidí Ó Sé cheese, wondering how many pilgrims have taken arán agus cáis on their journey here. The simple meal seems apt for this harvest journey; even though I’m early for Lughnassa, this is St Brendan’s feast day.

My solitude is broken as tourists arrive with a guide. They stand, gaze, wander, take photos and head back to the bus just as a second one arrives. I finish my food, hoist my backpack and leave. The crows pick up the crumbs.

Another stony boreen climbs behind Kilmalkedar onto rough open hillside rising to Cnoc Rinn Chonaill. The path meanders between low gorse and heather, a maze of sheep tracks confounding the route. Several ladder stiles cross field walls as I make slow progress over false summits to reach the coll. My knee complains but the views are worth it.

Past more fallen clocháns and cross slabs at the foot of the hill a road curves around the foothills of Mount Brandon before turning up a small lane towards the car park marking the end of the modern Cosán na Naomh. Here the Marian grotto by a concrete bridge at An Baile Breac (‘Speckled Townland’) has little presence, eclipsed by the bulk of Mount Brandon looming above, head in the clouds, hidden, impassive and uncaring.

Miracles have been attributed to climbing this sacred mountain and a stone plaque records recent cures but I won’t get one today; rest will be the best medicine for my knee and I don’t fancy meeting The Dark Crooked One – if, perhaps, Crom Dubh is still up there under the crags.

While walking this route I had a strong sense of passing through an area where a multi-layered history is evident in the landscape and in the notion of pilgrimage itself. Many of the archaeological sites have links to the pilgrimage, either as places that gave extra meaning to the journey or perhaps as opportunistic ways to provide for pilgrims’ needs. Pilgrimage has always tended to create a mix of both charitable and money-making provision for pilgrims’ spiritual and secular needs.

The bay around Ventry is Fionntrá, translated as ‘White Strand’, but the name is derived from the mythical Fionn mac Cumhaill (Fionn = ‘Fair-haired/skinned’). Mount Brandon is associated with Crom Dubh creating a polar pair of light versus dark at opposite ends of the route.

This an easy linear walk with only one, fairly gentle climb. The official distance is 17.7km (11 miles) but with the extra beach walk at the start and several short detours, I walked 21km. The route passes many interesting and accessible archaeological sites and has wonderful views everywhere. It is well marked, there are illustrated information boards along the way and easy car parking at each end. The only supplies are from the post office store in Ventry.

If visiting Gallarus Oratory, be sure to take the official free entrance provided by the OPW (it is well signed); there is another privately owned entrance and car park with a fee just down the road. The route to the shrine at the top of Mount Brandon is an extra 780 metre climb from the car park at Baile Breac. It is marked on the OS map and I have read that there are way-markers but don’t take my word for it. 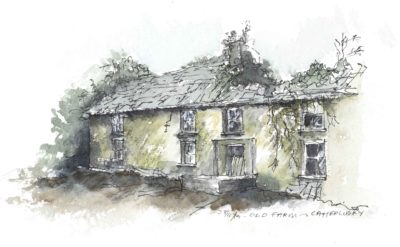 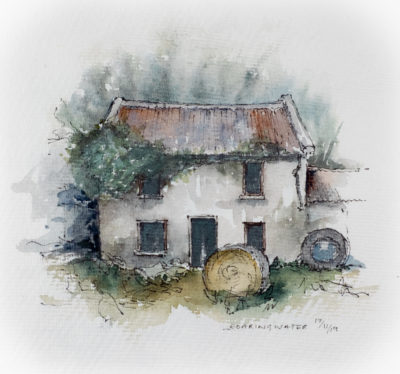