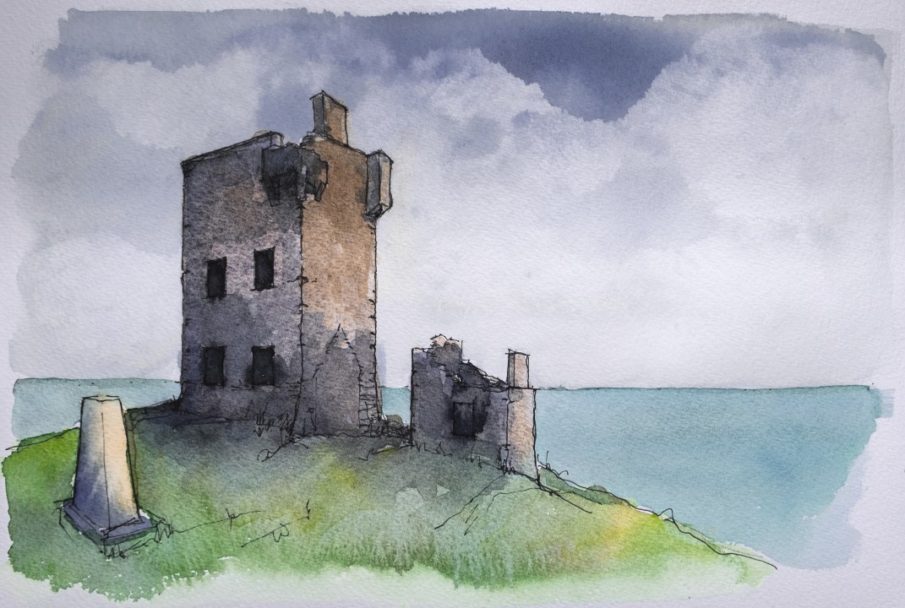 Swaying over the sound, leaning into the wind, a bull, a cow, and a calf, a dark past and a lonely present.

Sliced off from the end of the Beara peninsular and separated from the mainland by an angry tidal race, Dursey Island feels remote even before we get there along the narrow road from Castletownbere. Herself and a friend are researching holy wells with someone who knows the island and we go over on the first cable car of the morning.

We share the six-seat car with a man on a walking tour but carrying only a shopping bag; two local people and a dog: in the past livestock was carried too but Health & Safety put an end to that. Rising up to the first gently rusting gantry then down over the long centre span, the grey-green sea is visible through gaps between the wooden floorboards before we rise again to the second gantry, jolt through it and descend to the landing stage. It’s a short but unforgettable journey: the dog is as keen to be out onto firm ground as we are.

Dursey has a bleak natural beauty but feels sadly desolate. Official figures list the current population as three but we are told it may only be one now with landowners visiting from the mainland to tend sheep and cattle. Apart from a few seasonal holiday homes the three townlands that were once home to over 200 in the 19th century are now mostly in ruins and there is a very dark earlier history when English forces brutally massacred over 300 people in 1602.

As I set out alone along the only road, I think about how the past seems somehow embedded in the landscape of places like this. Some might say there are ghosts here and I can understand why. A short detour brings me down to the ruined monastery and burial ground sitting just above the shore. It feels lost and forgotten, even in the sunshine.

I climb back up over soft springy grass onto the road which rises and falls around the smoothly rounded hills that make up the island. Purple foxgloves hang on the cliff edges; the peaks of roofless gable-ends rise from the patchwork of fields running down the lower slopes; sheep and cattle graze below and a kestrel hovers overhead. This road must have seen plenty of traffic at one time and there is even an old bus stop: whether real or not I don’t know.

The road peters out onto short grass, the path a faint depression rising over the hill ahead. Over the brow, sheep pasture drops steeply down to a broken dry-stone wall and then rises again over a rounded hilltop dotted with white sheep. My toes meet the front of my boots as I descend to the wall and back into the heels once across it and up the slope. At the top, the tip of the island is in view below, the stump of the original lighthouse on Calf Rock, with Cow Rock and then Bull Rock beyond with the replacement lighthouse looking like something out of a James Bond movie.

I go down to the very end of the island where the foundations of a temporary lighthouse remain. A cold wind has begun to blow from the south east and I sit in the lea of the building for a few moments.

The official path returns over the steep hill but I notice another track following the contour lower down and take it. I enjoy following this type of path, scanning the ground to spot signs of flattened grass as the faint track winds across the landscape, easier to see in the mid-distance, often harder to see close to. Sheep, people and water all tend to follow these routes but this one is dry enough.

Eventually I join the main path up to the highest point of the island and the signal tower, one of a chain built along the coast to warn of an expected French invasion which never came. I look for a sheltered spot but a small walking group have taken the best rocks so lunch is uncomfortably chilly as the wind swirls around the broken tower.

The route back to the cable car is longer than I expect, making its way towards the north of the island before turning back down the hill. The change in the weather has brought many of today’s visitors back here early and there is a queue already waiting for the service to start again at 2:30 so we have to wait nearly an hour in the cold wind for the fourth crossing. A group who don’t get off the car, hoping to come just for the ride, are told politely to join the queue: they oblige reluctantly.

Back on the mainland we are invited to tea with relatives of a friend and experience West Cork hospitality at its best. 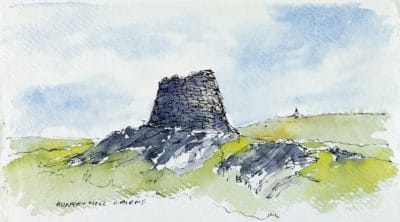 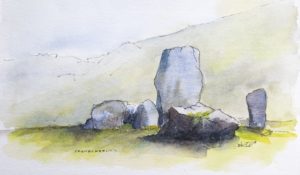 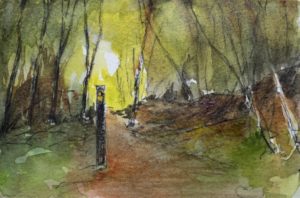 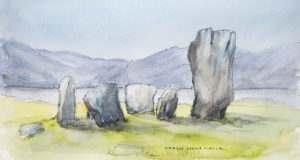